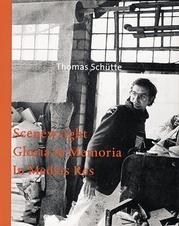 The artist Thomas Schütte, born 1954 in Oldenburg and Gerhard Richter’s student at the Dusseldorf Art Academy from 1973 to 1981, is a moralist who uses his work to posit questions and trigger uncertainty. At the same time, however, he is also a romantic and a melancholiac who, with black humor and skepticism, creates a model of the world.
In this publication, which goes back to the three-part, 18-month-long show at the Dia Center for the Arts in New York, in chronological sequence the works of the last two decades are documented. “Scenewright” the first installation In New York from September 1998 to January 1999, showed, among other things, the 1977 installation Grosse Mauer (large wall), as well as the work groups of the 80s that thematized views of public buildings and imaginary places, as well as theater stage sets. “Gloria in Memoria” from February to June 1999 studied the theme of the monument and the anti-hero (Mohr’s Life, 1988) from the drawings to the installation. The third exhibition “In Medias Res” from September 1999 to June 2000 concentrated on the monumental sculptures of steel – female figures and self-portraits – and of ceramic: among others, oversized urns, monumental portraits of the gallerist Konrad Fischer, nine life-size clay figures in colorful robes Die Fremden (The Strangers) from 1992