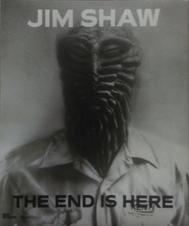 For over thirty years, Jim Shaw (b. 1954) has been one of America's most visionary and prolific artists. In his drawings, paintings, and sculptures, he has mined the fringes of popular culture and delved into his own subconscious in order to create a constantly evolving portrait of America. This catalogue is the most comprehensive analysis of his multifaceted career to date. It contains texts by curators, writers, and artists, each of which tackles a particular facet of Shaw's complex approach to art-making. It is published on the occasion of the New Museum exhibition 'Jim Shaw: The End is Here', the artist's first major American survey exhibition.

Originally from Michigan, Shaw was part of a group of young artists who redefined art in Los Angeles in the 1980s. His early work deployed a virtuoso drawing style to create mysterious, surreal portraits.

In the late 1980s and 1990s, he produced his sprawling series 'My Mirage' (1985-91), which tells the story of an American boy growing up amid the tumult fo the late twentieth century through an encyclopedic compendium of graphic styles. In the mid-1990s, Shaw began his iconic series 'Dream Drawings' and 'Dream Objects' for which he used his own nighttime visions as the source for endless new images tor produce when he awoke. He has also proved influential through the exhibition of his constantly growing collections of thrift store paintings and religious pedagogical materials - both of which amass under-appreciated forms of creativity found across the country. In recent years, he has created a number of large-scale painted backdrops combining characters and narratives frmo throughout history to explore the roots of America's cultural, religious, and political identity.

Shaw's expansive style and vision have made him one of the most influential artists of the past three decades. The exhibition and this accompanying catalogue offer the first opportunity to full survey his singular visual world.